The NRCN commissioned this report to look at the funding needs of rural forces in the light of rural demands. Its purpose is to build an evidence base to ensure that the needs of rural communities are appropriately and fairly met by any newly proposed funding formula or arrangement. 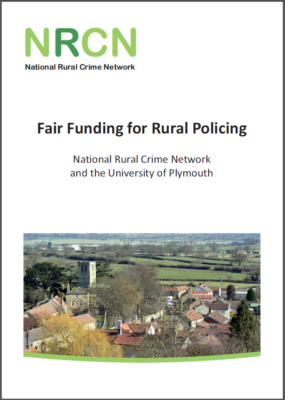 In recent years, as Police and Crime Commissioners (PCCs) have listened to their rural constituents, awareness of the impact of rural crime has increased. It is slowly being recognised that rural areas, with isolated, sparsely populated areas and limited access to support services, need an appropriate policing approach.

The National Rural Crime Network (NRCN) was formed to address these concerns. It consists of 30 PCCs plus rural stakeholders who recognise, and are working to improve, the response to this demand. In an environment of smaller budgets and shifting response models, it is vital that Government provide fair funding for forces with rural demands, some of which have only recently been identified.

A survey conducted by the NRCN in 2015 shows that the demands and impact of rural crime on a dispersed population put it on a par with the challenges of tackling crime amongst dense urban populations. On average, rural communities foot a crime bill of up to £800 million every year, and have only half the confidence in the police’s ability to respond to their needs compared to the nation as a whole. That only a quarter of people surveyed for the Crime Survey for England and Wales are from rural areas, gives an indication as to why rural concerns may not have been well understood until recently.

The NRCN therefore commissioned this report to look at the funding needs of rural forces in the light of rural demands. Its purpose is to build an evidence base to ensure that the needs of rural communities are appropriately and fairly met by any newly proposed funding formula or arrangement.

Whilst this report was being written the Home Office withdrew its proposal after serious concerns were raised during consultation. However, with the funding formula still under review, the NRCN considers the findings of this report as important considerations for any future proposal.

The proposed funding formula evaluated its approach using count-based correlation coefficients based on reported crime, rather than correlations based on crime rates per head of population. This heavily skewed their findings dependent on population size and density, and by higher volume crimes predominant in urban areas. This also negates the far greater amount of police time spent on non-crimes. This report therefore sets out to demonstrate why and how this analysis needs to be revised in future to better reflect complex crime patterns across all areas of the country.

The report also looks to raise awareness of the additional costs associated with rural policing which occur in sparsely populated areas. Pressures from gaps in the delivery of other services and seasonal movement from urban areas are more significant for rural forces, for example. A fair funding formula must account for these aspects.

Importantly this is not to say that urban forces do not have their share of problems; nor that rural forces should be treated as special cases. Simply, complex and varied demands on police officers and budgets in different areas and contexts must be taken into account to ensure fair funding.