Troubling new insights into the prevalence and impacts of hare coursing in the countryside have been provided by farming families in response to a survey carried out by the Yorkshire Agricultural Society. 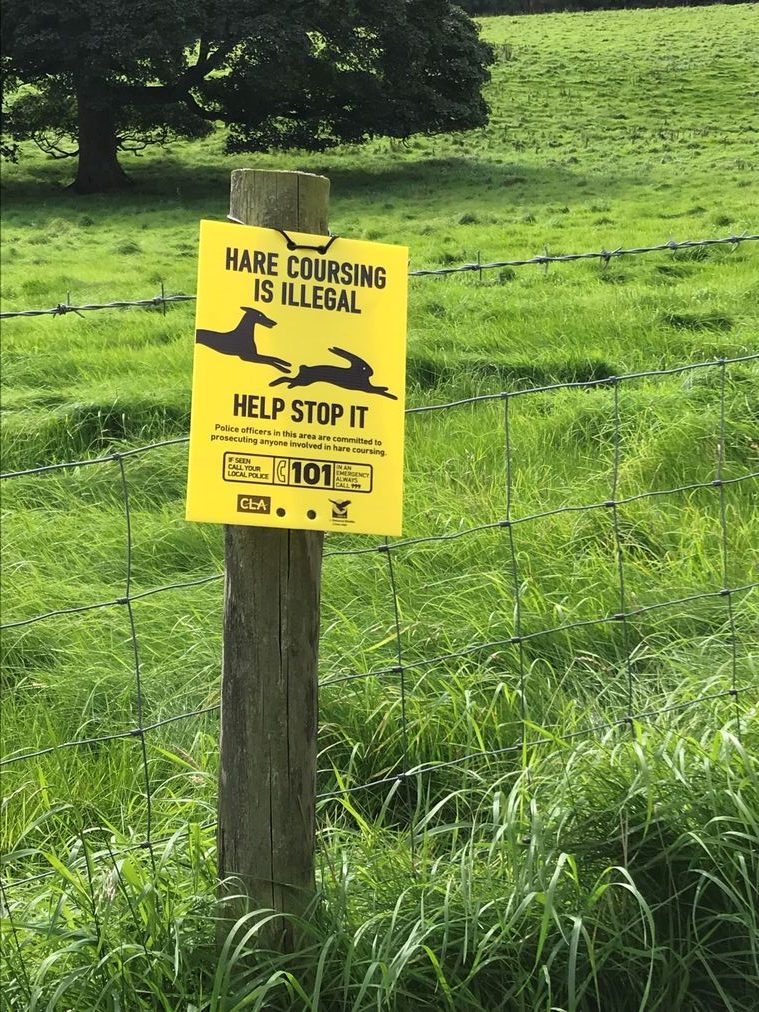 More than 300 people took part in the survey and the findings demonstrate how important it is that this horrific crime, which involves using dogs to illegally pursue and destroy wild hares, is tackled far more effectively – something the National Rural Crime Network has been campaigning for for some time.

The survey results show that farmers are often targeted repeatedly, face a barrage of abuse from brazen criminals and spend thousands of pounds to repair the damage caused.

The highest number of hare coursing incidents were reported from farmers in North Yorkshire and East Yorkshire but evidence of the crime was shared from as far afield as Aberdeenshire, Gloucestershire, Somerset and Northern Ireland.

In most cases the crime is a reoccurring problem on the same farms. The survey found that in 82% of cases the same farm had been targeted at least three times since the start of last year.

When police were called, their response was rated as satisfactory by just 18% of farmers. Farmers reported inconsistent responses when reporting the crime was taking place. Most of the time (87%), the police call handler confirmed that officers were being dispatched to the scene but 88% failed to offer their estimated time of arrival. When an ETA was given, officers rarely attended within the given timeframe (28%).

The importance of tackling hare coursing is clear for farming families’ well-being and the profitability of their businesses. In almost half of all cases (48%) farmers were either threatened or verbally assaulted. One respondent said they had been physically attacked.

Overwhelmingly, hare coursing results in criminal damage (86% of cases). Crop damage was the most widely reported (45%), followed by damaged fences and hedges (11%). There were also reports of sheep being killed and livestock being left to escape onto highways.

Farmers are doing what they can to deter hare coursing. Some 81% of farmers said they had taken action, such as installing extra gates and security cameras, and creating earth banks and ditches to keep criminals out of fields, and all this has come at great cost.

One in five farmers said they had spent at least £5,000 on repairing damage or taking preventative action in the last three years. For 7% of farmers, this bill has exceeded £10,000.

More than half (54%) of farmers said they had raised the issue with the police or their MP.

Charles Mills, a farmer near York and Show Director of the Great Yorkshire Show, has experienced hare coursing on his farm for at least 35 years. He said: “The findings of our survey are disturbing but sadly, they do not surprise me.

“Hare coursing clearly continues to be a reoccurring problem on many farms, and farming families are paying a heavy price, both in terms of their sense of safety and wellbeing being compromised, and the costs of repairing damage and installing deterrents. This is a hugely frustrating situation.

“The survey results tell me that hare coursing is not being driven out of the countryside anywhere near effectively enough. This needs to change. Farmers also need more consistent communication from police forces to reassure them that this crime is being taken seriously and to ensure that this crime does not go underreported.”

The Yorkshire Agricultural Society is sharing the survey findings to add to calls for a more robust response to hare coursing. YAS has written to Yorkshire’s MPs and Police and Crime Commissioners, the Department for the Environment, Food and Rural Affairs, the Home Office, The National Police Chiefs Council and National Wildlife Crime Unit.

The National Rural Crime Network will also be continuing our work on this issue and our members, the Country Land and Business Association (CLA) and the National Farmers Union (NFU), will continue their work to help inform national efforts by a coalition of countryside groups to secure legislative change.

CLA North Adviser Libby Bateman said: “We regularly hear anecdotal evidence of the problems associated with hare coursing, and it is incredibly useful to now have some empirical data to spotlight the scale of the problems. The Yorkshire Agricultural Society should be highly commended for the effort that has been put into developing and delivering this survey and the presentation of its finding.”

Last month, the Government included a commitment to introducing new laws to crack down on illegal hare coursing as part of its new Action Plan for Animal Welfare.

NFU Regional Director Adam Bedford said: “For many years the NFU has highlighted to government how farming families suffer emotionally, mentally and financially from increasing levels of hare coursing and its associated criminal and anti-social behaviour.

“We are encouraged by the government’s announcement in the Queen’s Speech that they will introduce laws to crack down on this shameful crime, but we are eager to see the detail of their plans and understand how we can continue to work with them and the police to secure the best possible outcome.”

Charles added: “Thank you to all the farmers who took the time to fill in the survey. Your responses add weight to calls for this crime to dealt with more consistently, more urgently and with greater consequence for the criminals responsible.”

You can visit the Yorkshire Agricultural Society’s website here >>