It’s National Rural Crime Week of Action – and the people of Essex are doing their bit! 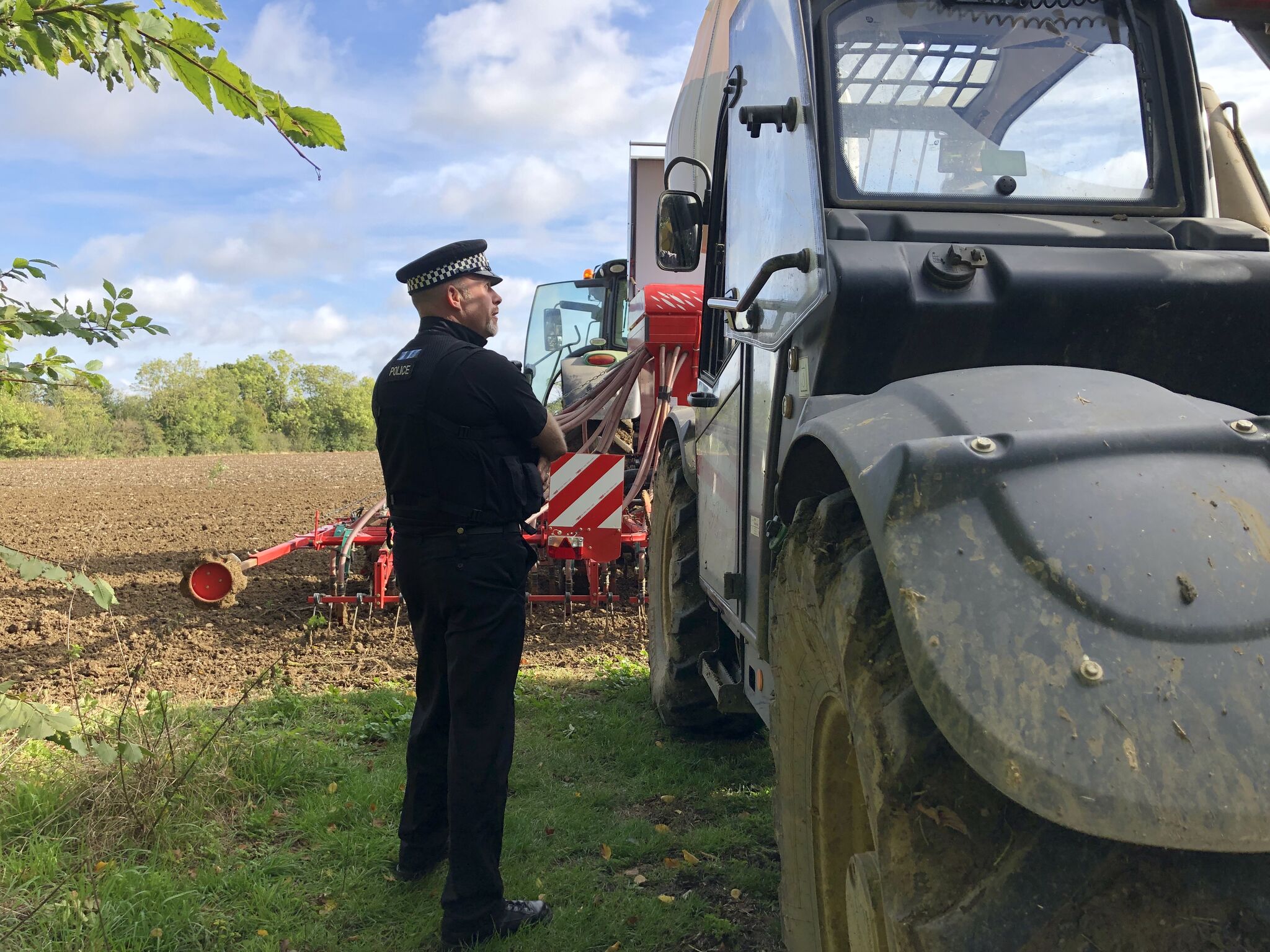 On Sunday, 5th October, the Essex Police Rural Engagement Team were out and about patrolling known Hare Coursing hotspots. A fleet of 5 vehicles – including 4×4 off-road capability and response cars – headed to the north of the county. They liaised closely with Rural Policing Teams in Suffolk and Cambridgeshire to share intelligence about coursers working across county borders. By the end of the day Essex Police Rural Engagement Team had seized a car and a dog involved in coursing. A great start to the week!

On Monday 6th, Deputy PFCC, Jane Gardner, and Community Safety and Reducing Reoffending Manager, Suzanne Harris, joined the Rural Engagement Team for a morning. The Team joined a multi-agency visit to consider action against planning breaches. The drone was employed to gain a good overview of the site, which can provide evidence for partners. Whilst out, a stolen trailer was recovered and sent for inspection with the aim of identifying the owner.

In the afternoon, Roger Hirst, PFCC joined the Rural Engagement Team – and helped to herd 20 escaped goats back to the safety of a field, after they had strayed onto a highway! Later that same afternoon a vehicle stop check found a stolen vehicle and a driver who was under the influence of drugs. All in all a good afternoon for road safety in the county!

Tuesday 8th started with an act of kindness, as one of the team helped a stranded motorist to change a wheel enroute to the days briefing. It’s not all about catching criminals! The team were in the right area to respond to a Tracker activation, and quickly located a 4×4 which had been stolen that morning.

Another multi-agency operation took place, this time observed by Pippa Brent-Isherwood, Chief Executive of the PFCC office, and involving Thurrock Council, the Environment Agency and the Metropolitan Police Force. Pippa wasn’t the only one observing the team’s work on Tuesday – James Bettley, the High Sherriff of Essex, also joined the team, and had an interesting and enjoyable day.

Before the day was out the team visited an unauthorised encampment in Colchester, as part of regular monitoring of the site.

On Wednesday 9th, Suzanne Harris went out with the Rural Engagement Team again – this time accompanying PC Nigel Wright to see the variety of jobs dealt with during the day. The day began in Takeley where the Rural Engagement Team responded to one of the top rural crime issues identified through public surveys informing the Rural Crime Strategy – speeding. Essex Roads Policing Unit supported the operation, which not only addressed several speeding vehicles, but also identified a driver under the influence of drugs – all were reported.
The centre of operation was outside a children’s nursery, so the team took the opportunity to engage with parents dropping off their children, helping to reinforce a positive image for young people – some of the children even got to try on a police hat!

Another priority of the Rural Crime Strategy is fly tipping and waste crime. Occurring on a variety of scales this brings great cost to private landowners and public bodies, as well as having an environmental cost. A number of vehicles carrying waste were stopped and checked to ensure they had the right paperwork – including a Defra-issued Waste Carrier License. Whilst none were found to be breaking the law, lots of advice and reminders were shared about legal disposal of waste. We also took some photographs – just in case some of what we saw turns up somewhere that it shouldn’t! There was lots of positive engagement, and we raised awareness that checks are undertaken randomly and that we will pursue any cases where correct procedure is not followed. We also shared some of the intelligence with the relevant local authorities, as they have a major role to play in waste crime enforcement.

The static speed checks moved to a new location, and the roving vehicle checks continued throughout the day. Driving around rural Essex the team stopped to engage with rural and farm workers wherever an opportunity presented itself – this included some farm workers, pleased to see a police presence, who were offered advice on tracking equipment for expensive machinery to pass on to the owner.

We visited some farmers who had been repeat victims of hare cursing recently – and they were all very pleased to see us. Essex is generally an arable county, but we found sheep, goats, chickens, pigs and alpacas on our travels – as well as the cutest black Labrador puppy, who very nearly jumped into the car to join us!

It wasn’t all friendly engagement in the afternoon – we also responded to two emergency situations. The first was an unsuccessful search for a vehicle linked to a suspected attempted burglary in a rural village, which was slightly disappointing. The second saw us on ‘blues and twos’ in pursuit of a vehicle of interest to the police which had activated an ANPR camera not too far from where we were. With the help of the Roads Policing Unit the vehicle was brought to a stop – the occupant was reported for several motoring offences and the vehicle was seized. Before the day was over we checked on a site which had recently been vacated by an unauthorised encampment, and found a man who was clearing up litter as a volunteer – great to see people caring for their community in this way. We also called in on the site on which the encampment had moved to as part of the regular monitoring.

PCs Harkness and Raven finished the day checking out 2 suspicious looking 4x4s – and ended up assisting the owners, who were just out blackberry picking!

On Thursday 10th, the team had been engaging with our coastal and marine community and carrying out more Op Galileo patrols.

By Friday and the end of the week, there will have been a total of six Crime Prevention Stands in different parts of the county, offering advice and an opportunity for the public to engage, and on Saturday the Rural Community Council of Essex will hold its annual conference for Village Halls, and Essex Police will be in attendance to offer advice to the volunteers who manage these community facilities. Throughout the week local Community Policing Teams and partner organisations have undertaken additional activities in their local areas to support Rural Crime Week, as well as supporting a joint social media campaign to raise awareness of what rural crime is and how it can be prevented or dealt with.

Once Rural Crime Week is over, the Rural Engagement Team will continue to police the rural areas of Essex. 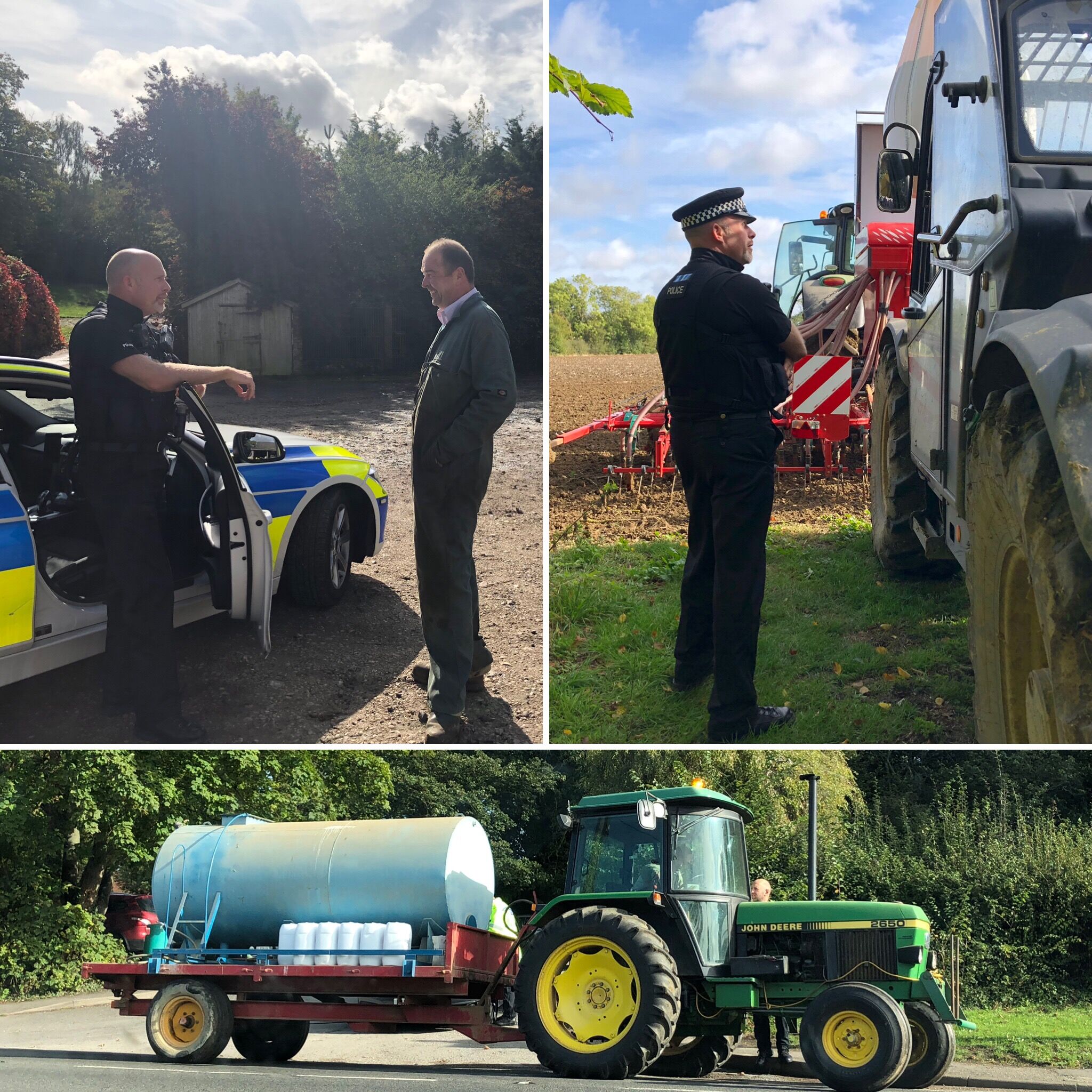 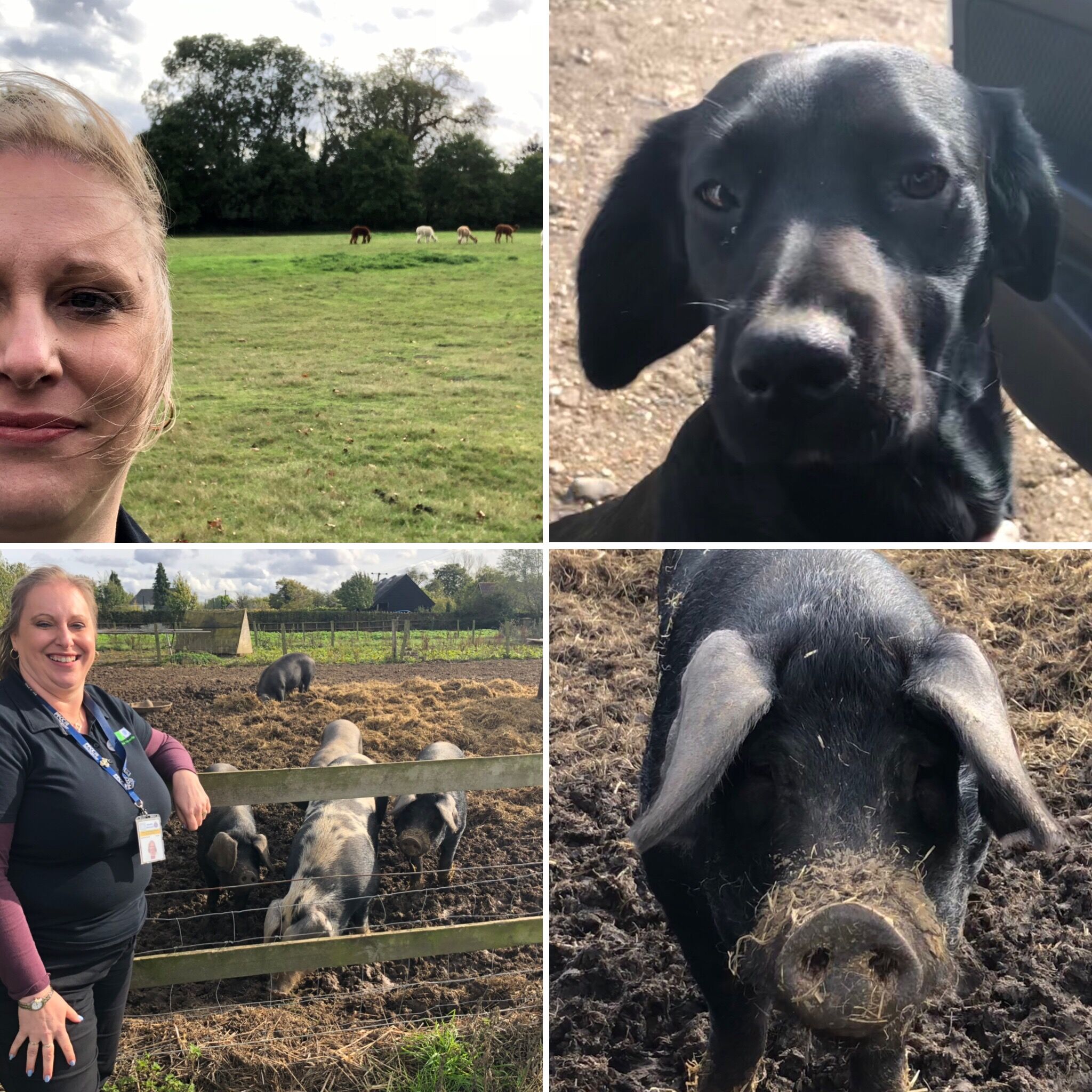 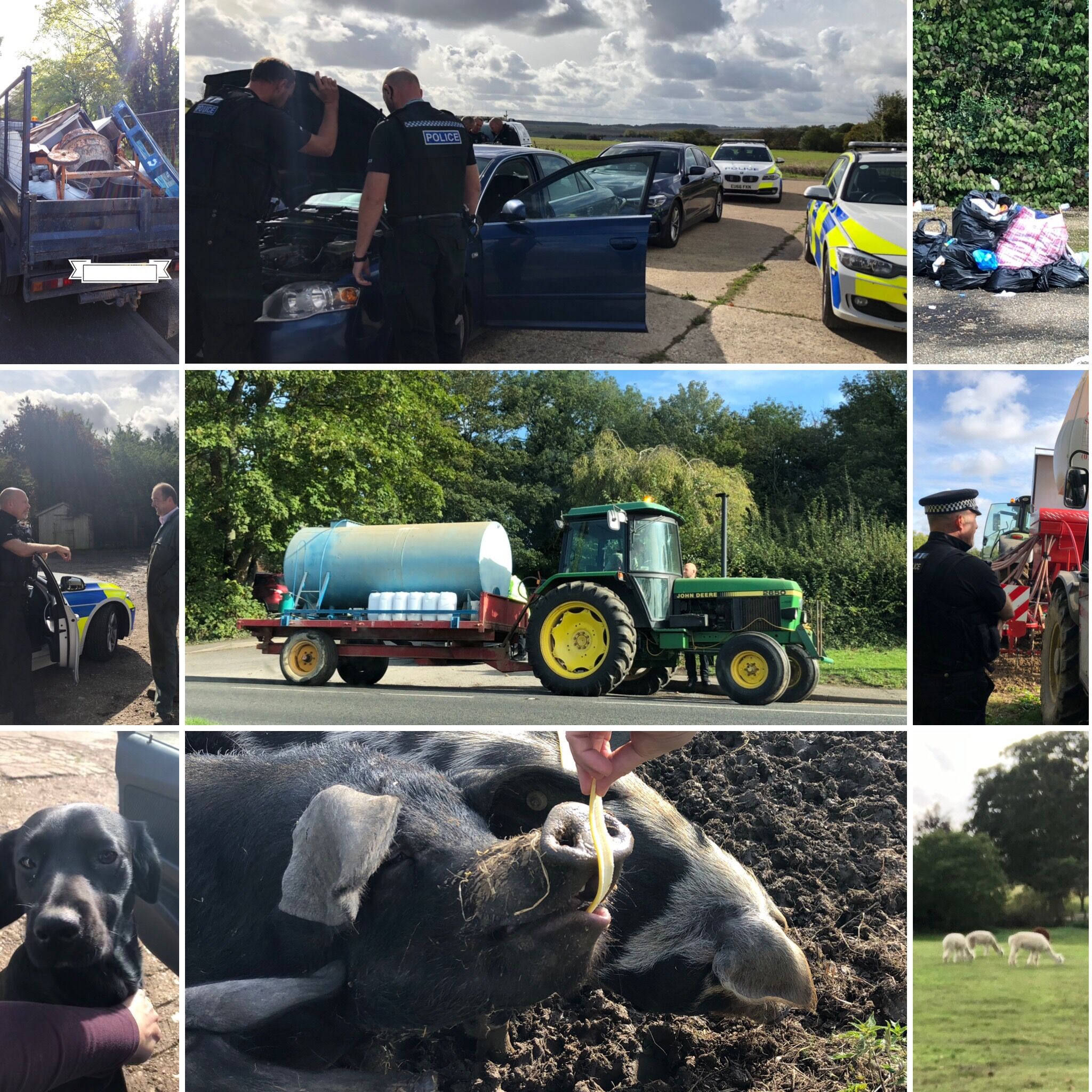